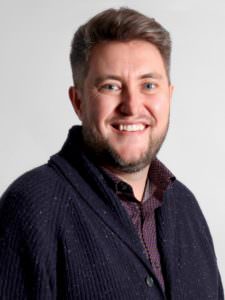 Brian Erickson (he/him) brings a firm belief in the power of story to drive narrative change and create political leverage for social change. In his role as the Digital Communications and Multimedia Manager, Brian combines values-based messaging best practices with documentary film and emerging media trends to produce multimedia stories that help audiences envision a more equitable and just future.

At heart, Brian is a messaging nerd who loves a good film and followed his passion to complete a master’s degree in Media Studies at The New School. His studies focused on honing technical skills in digital storytelling and video production, including cinematography, non-linear editing and color grading, film theory, and documentary practice.

When he’s offline, Brian and his family can be found hiking and camping in the woods or exploring the delicious food scene in Philadelphia.