Skip to content
The Opportunity Agenda – Our Tools – 10 Key Facts About Perception of Fear, Safety & Criminal Justice in CA

In recent years, California has emerged as fertile ground for progressive criminal justice reform, with the passage of policies such as SB 439, SB 1319, and SB 10—just a few examples of activists, advocates, and policymakers’ recent success working within the state. Despite these many gains, challenges abound, including continued resistance to the adoption of policies that rectify the disproportional targeting of communities of color in the past. At the same time, the overt xenophobia in today’s political discourse has made fear-mongering and scapegoating more commonplace in law enforcement and other government agencies interactions with communities of color.

With the goal of gaining a better understanding of these state-level successes and challenges while also gathering insights that can be translated to messaging strategy for use in the ﬁeld at large, The Opportunity Agenda and the ACLU of California engaged in a collaborative research project examining Californians’ attitudes and beliefs about the criminal justice system. This memo draws from the data from a statewide survey of 1,055 randomly sampled respondents representative of Californians administered in July 2018.

This memo draws on the results of a collaborative research project with the ACLU of California conducted in July 2018. The insights are based on data from a statewide online dial survey administered to a total of 1,055 registered voters in the state. The margin of error is ± 3.1 percent for the overall sample and larger for subgroups.

In this memo, we make references to three populations deﬁned as the base, opposition, and persuadables. Our base, opposition, and persuadables were created using a statistical cluster analysis that identiﬁed groups of like-minded voters based on the patterns of their responses to a series of questions about their attitudes toward the criminal justice system, discrimination, racial inequities, and a variety of related topics.

The Opportunity Agenda wishes to thank and acknowledge the many people who contributed their time, energy, and expertise to the research and writing of this report. The survey was commissioned and designed in collaboration with Cheryl Alethia Phelps, Communications Director of the ACLU San Diego and Imperial County and Margaret Dooley-Sammuli. Data was collected, cleaned, and analyzed by Andrew Hart and Steven Riskey of Strop Insights and Kyle Francis of Qualtrics. Additional analysis of data and the drafting of this report was conducted by Lucy Odigie-Turley of The Opportunity Agenda. Recommendations were drafted by Julie-Fisher Rowe of The Opportunity Agenda. The graphics and illustrations were created by Lincoln Bovell. Final proofing and copy editing were conducted by Margo Harris. Finally, this report would have not been possible without the support of our generous funders: American Civil Liberties Union, John D. and Catherine T. MacArthur Foundation, Marguerite Casey Foundation, Nathan Cummings Foundation, The Annie E. Casey Foundation, The Ford Foundation, The JPB Foundation, The Libra Foundation, The Tow Foundation, Unbound Philanthropy, and W.K. Kellogg Foundation.

1. California has a strong base of support for wider criminal justice reform, and a significant portion of Californians are persuadable on a variety of reform issues

The opposition is defined by a strong belief in the fairness of the existing criminal justice system, a preference for harsher punishment over rehabilitation, and support for the profiling of specific racial/ethnic groups. Persuadables hold views that overlap with both the base and opposition but are most strongly defined by their self-reported lack of familiarity with most roles within the criminal justice system, including prosecutors and public defenders.

2. People of color, low-income adults, and the religiously unaffiliated are an important base of support for criminal justice reform in California

3. Base and persuadable audiences have distinct media consumption and engagement habits

Base and persuadable audiences have distinct media consumption and engagement habits: Media consumption and usage habits are increasingly recognized as important predictors of political decision-making and attitudes related to a range of issues. To gauge their impact, if any, on Californians ’ attitude toward the criminal justice system we included a range of questions about participants’ engagement with news and social media and different genres of entertainment media. In terms of entertainment, all audience segments reported similar rates of regular use and engagement on Facebook, YouTube, and Instagram, but persuadables are slightly more likely to report that they make regular use of Twitter (36%) compared to the base and opposition (27% and 28%, respectively). 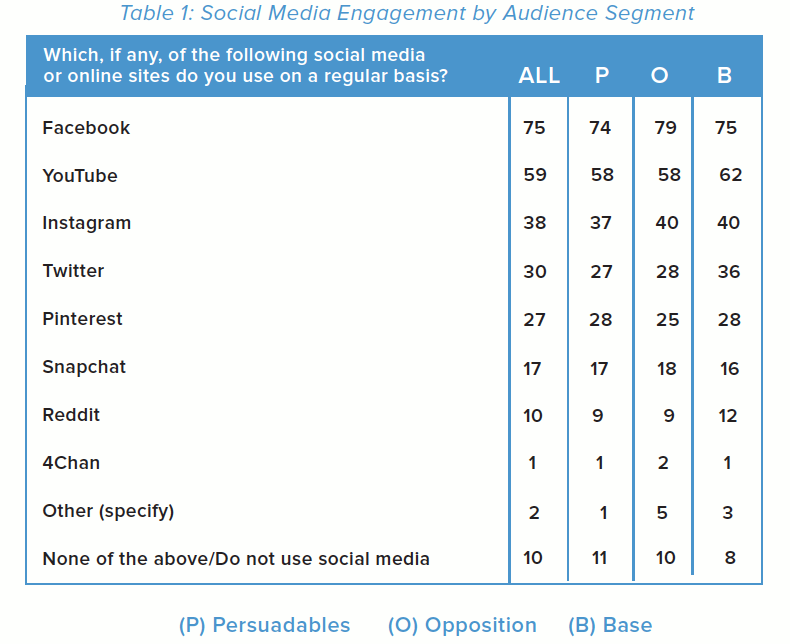 4. Police accountability is the highest policy priority identified among all segments

5. Bail reform and issues at the intersection of homelessness and criminal justice are lower priorities among both base and persuadable audiences 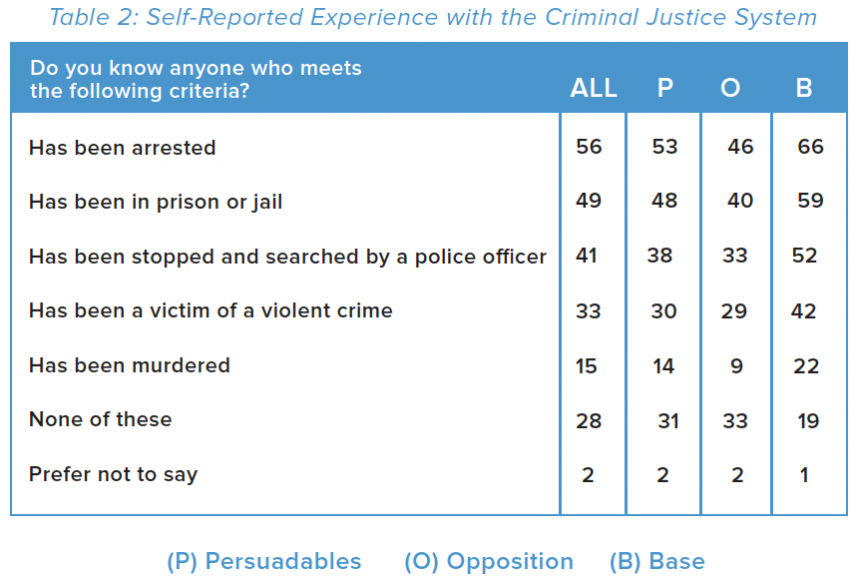 7. Perception of physical safety is a key predictor of attitudes toward and perceptions of the criminal justice system

As noted in our analysis of existing public opinion research related to criminal justice, fear of crime and victimization have long been recognized as a driving force behind Americans’ attitudes toward criminal justice policy. In an effort to examine this relationship more closely in the context of California, we included a series of questions intended to gauge respondents’ level of fear related to their physical safety and the impact, if any, on their attitudes toward criminal justice. Respondents were asked how often they have serious concerns about their safety in a range of places, including at home, while driving, or in their neighborhood, and they ranked this concern on a 5-point scale, from “never” to “often.” We used participants’ responses to create a fear scale, with respondents grouped as low, moderate, or high fear based on their average score. 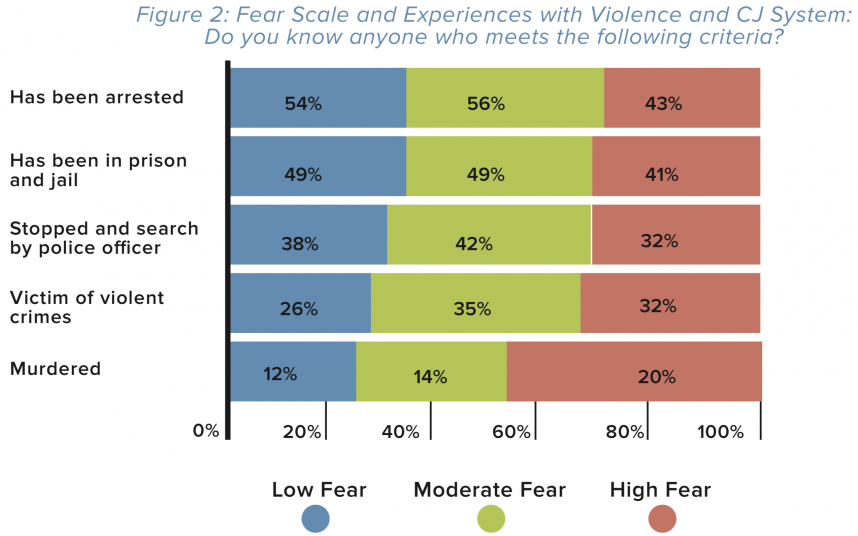 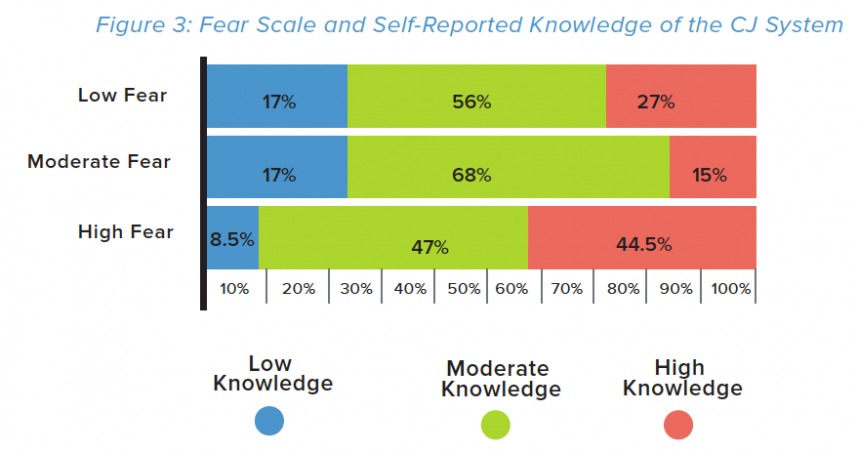 Our findings show that although a plurality of Californians believe that the criminal justice system generally treats people fairly, responses to this question varied significantly between audience segments and also when participants were asked more specific questions regarding who is more or less likely to receive fair treatment. When asked to what extent different demographic groups are treated fairly or unfairly by the criminal justice system, the majority of Californians expressed the belief that Black men (59%), people living in poverty (58%), undocumented immigrants (53%), people who have been incarcerated (53%), and immigrants (52%) are somewhat/very likely to receive unfair treatment in the overall criminal justice system (Figure 4). 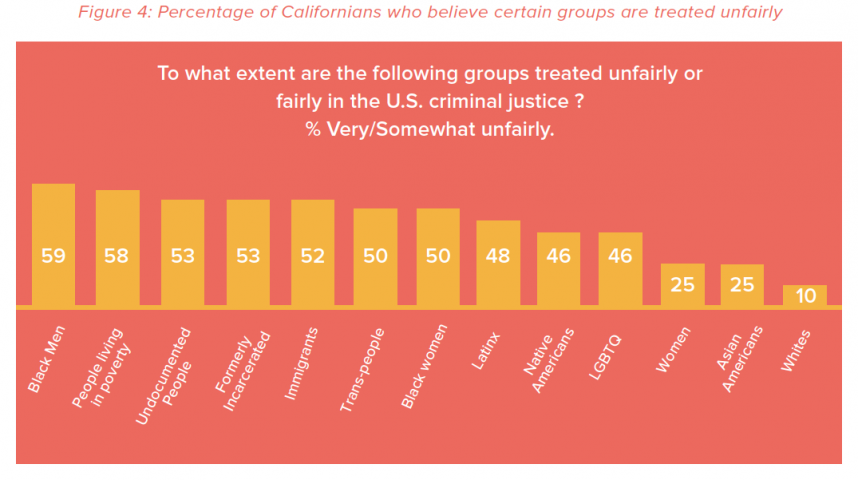 10. All segments appear to make a distinction between “unequal” versus “unfair” treatment within the criminal justice system 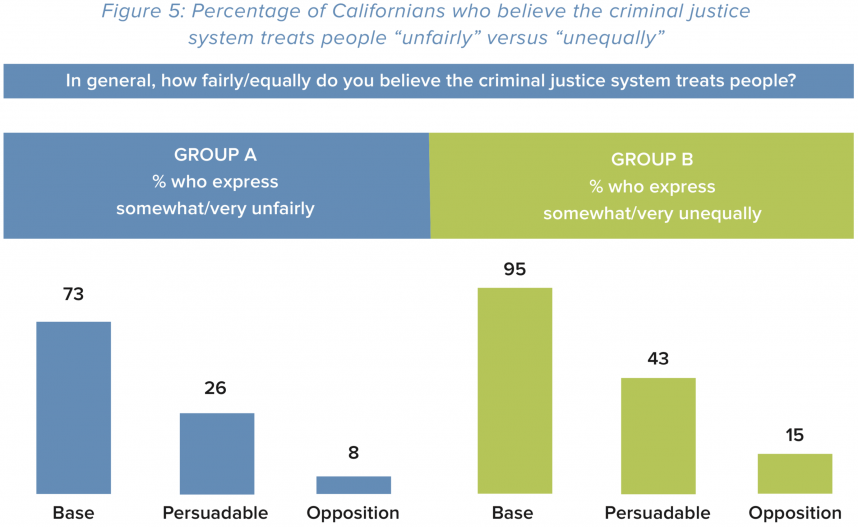