Skip to content
The Opportunity Agenda – Our Tools – 5 Key Facts: Online Discussion of Immigration in The Trump Era

5 Key Facts: Online Discussion of Immigration in The Trump Era

As we enter the half way point of Donald Trump’s first year as president, the ripple effects of the new Administration’s policies have been far reaching. From the Muslim travel ban, to attempts to dismantle women’s reproductive rights, healthcare, and social safety nets—few have gone untouched in the past 6 months. In the face of these challenges, people across the country have rallied together to challenge the Administration’s attacks on freedom and democracy. Just this week, 45 states refused to provide Trump’s administration with voter data.

It is clear that transformative change is still possible and a collective future based on the shared values of diversity and inclusion is still very much within reach. However, central to our success will be understanding how to effectively reach persuadable audiences, and help them distinguish between legitimate policy concerns and the fearmongering that has come to characterize the Trump era. This requires a nuanced understanding of how Americans are currently thinking and talking about immigration, diversity, and demographic change.

In an effort to provide immigrant advocates, activists, and policymakers with a fuller understanding of attitudes toward immigration and related issues in the current social and political climate, we conducted a social media analysis of online discussions in the United States between January 1st 2015 and January 1st 2017.

The objectives of this research were:

Our findings indicate that online discussion of immigration, diversity, and demographic change have become more interconnected with discussion of terrorism and crime. The presidential campaign and election of Donald Trump appear to have played a direct role in this new interrelationship. Despite these troubling findings, social media is also emerging as a space where communities of color, Muslim Americans, women, and other traditionally marginalized groups are turning to express their own fears and challenge divisive rhetoric. 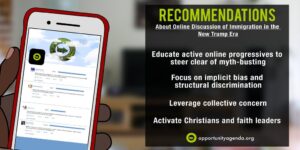 The analysis of social media data was conducted using Crimson Hexagon, a leading social media analytics software which provides access to publicly available social media data including, but not limited to Twitter, Facebook, Instagram, blogs, forums/popular message boards such as Reddit, and mainstream news article comments, reviews, and YouTube comments. Crimson Hexagon enables users to create monitors for any topic or set of phrases and establish customized timeframes for data analysis. Once a monitor is established, Crimson Hexagon’s algorithm categorizes relevant social media data – identifying content volume trends, patterns in conversation, demographics, sentiment shift over time, and audience segment interests/affinities. Interests and affinities are generated by analyzing the social media habits of audiences partaking in particular online discussions (i.e. what brands, topics, or media sources this audience segment tends to share, which can then be compared to other audience segments.)

Key findings from our latest analysis include:

1. There has been a steady increase in the volume of online engagement around immigration and related topics within the last two years, with significant spikes in engagement following extremist attacks.

Over the past two years, over 59 million tweets, Facebook posts, and forum/blog/news comments have been written about immigration, immigrants, race and diversity in the U.S. On average, roughly 2 million social media posts involving immigration, immigrants, and broader discussions of diversity and race were posted each month in the United States during the period of time we studied. 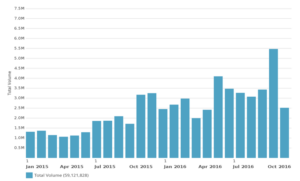 Between June 2015 and November 2016, there was a steady increase in the level of engagement in online discussions of immigration, immigrants, and related topics and three significant spikes in the volume of posts: November 2015, June 2016, and November 2016. The first two spikes in online engagement were a direct result of international and domestic attacks carried out by extremists – the first taking place in Paris, France in November 2015 and the second in an Orlando, Florida nightclub on June 12th 2016. The final spike in online engagement took place in November 2016 as a result of Donald Trump’s unexpected victory over Hillary Clinton in the presidential election.

2. The framing of online discussion of immigration has shifted dramatically since the start of Trump’s presidential campaign, with sharp increases in references to “illegal immigrants”, “illegal alien”, and “Muslim” within online content.

Reactions to domestic and international attacks on civilians and inflammatory statements made by Donald Trump have set the tone for the vast majority of online discussions concerning immigration and related topics in the last 12 months. Figures 2 to 4 depict a cluster of the most common phrases associated with immigration and immigrants in the United States from January 2015 to November 2016, with the larger words representing phrases which feature more heavily in online content.

As seen in Figure 2, at the onset of 2015, while discussions of “illegal,” “aliens,” and “Muslim” in relation to “terrorism” were present in online discourse, talk of “reform,” “amnesty,” and “uslatino” also featured heavily in online content. However, by December 2015 following the attacks in Paris, there was a significant shift in online discourse with “trump” and “realdonaldtrump” emerging as central phrases linked to overall discussions of immigration, alongside a more direct link between references to “immigration” with “terrorism,” “illegal,” and “ban”. As of November 2016, references to “trump” feature heavily as well as talk of “illegals” and a closer link between discussions of “Muslims” with “Latino” and “Hispanic” people. 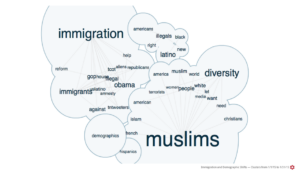 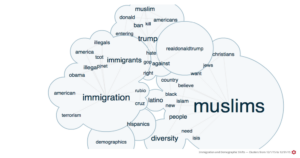 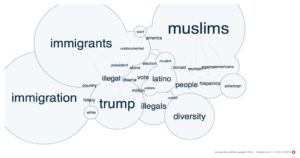 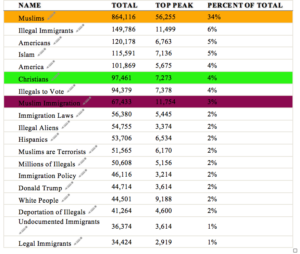 3. The majority of audiences engaging in online discussions concerning immigration reside in states with the highest concentration of immigrants in the country.

Using Crimson Hexagon’s demographic feature, we examined the location, gender, age, and race of audiences engaging in discussions about immigration and related issues online. From the total sample, 30,786,770 posts had an identifiable location. The majority of audiences engaging in online discussions concerning immigration, immigrants, and related topics are located in California (15.39 percent of sampled content), New York (10.28 percent), Texas (10.14 percent), Florida (7.29 percent), and the District of Columbia (4.23 percent).

4. A significant portion of individuals engaging in online discussion of immigration are people of color.

Roughly 75 percent of those engaging online are 35 and above (based on an analysis of 1 million posts), 8 percent are between 25-34, 10 percent are 18-24, and 7 percent are 17 or younger. In terms of race and ethnicity, online users skew heavily white, however there is a significant portion of Asian and Black people engaging in these online discussions. Currently, roughly 65 percent of online audiences discussing immigration and related issues are white, 16 percent are Black, 11 percent Asian, and 7 percent are Latino[1].

5. While conservative media outlets represent a significant portion of Twitter mentions and retweets, progressive and pro-immigrant voices have gained significant traction in recent months in terms of share of the total online conversation.

This following section provides an overview of the key Twitter influencers driving some of the online discussions around immigration, immigrant communities, race, and diversity more broadly. Top influencers on Twitter are the most active authors in a conversation over a particular time period, regardless of their influence (Klout) score. Influence on Twitter is determined by an author’s volume of tweets related to a given topic.

Recently, top mentions on Twitter related to immigration and immigrant communities, including discussions of Muslim and Latino communities, have been dominated by right-wing media outlets such as Breitbart and FoxNews (as seen in Figure 5).  However, many of these mentions emerge in the context of individuals critiquing these outlets for anti-immigrant coverage. In addition, a significant portion of retweets from the month of December 2016 have come from progressive activists, comedians, or political commentators calling for unity and resistance in the wake Donald Trump’s election. JLUSA founder Glenn Beck, Modern Family actor Jesse Tyler Ferguson, and writer and political activist Shaun King are just some of the progressives speaking out in recent months and actively countering anti-immigrant and racist rhetoric.

These findings present several important implications for messaging and audience engagement around immigration and diversity in America.

[1] However, the lower percentage of Latinos is likely due the limitations of Crimson Hexagon’s racial categorization, specifically the difficulty in accurately assigning racial/ethnic categories to Latino users.