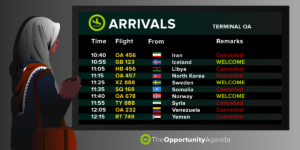 On June 26, 2018, the U.S. Supreme Court issued its decision in Trump v. Hawaii, allowing the Muslim Ban to stand.

In a 5-4 ruling in Trump v. Hawaii today, the U.S. Supreme Court stunningly ignored the foundational American principles of religious freedom and human rights. Applying the lowest level of Constitutional scrutiny while also ignoring pre-inauguration tweets and other declarations of racial and religious animus, the Court held that the Muslim Ban was within presidential authority and, instead, focused on the justification provided by the Executive Branch in the language of the Muslim Ban itself.

What follows are The Opportunity Agenda’s messaging recommendations for discussing the case, pending a more thorough review of the multiple opinions in the case.

With this ruling, the court’s majority has closed their eyes to religious discrimination, which is profoundly harmful to the people in our families and communities, and to our nation’s values of religious freedom and basic rights. Today’s decision allows the president’s self-avowed discrimination based on religion to become a part of our nation’s migration policy. Although the Supreme Court has now spoken, it is the people who must decide the character, values, and direction of this great nation.

We must now call upon policy makers at all levels, including Congress, to return the principles of religious freedom and human rights to that policy.

As noted in Justice Sotomayor’s dissent: “The United States of America is a Nation built upon the promise of religious liberty. Our Founders honored that core promise by embedding the principle of religious neutrality in the First Amendment. The Court’s decision today fails to safeguard that fundamental principle.”

The values at issue in this case are religious freedom and human rights. Today’s decision undercuts the core beliefs on which this nation was founded.

When possible, communications on the case should emphasize the following themes:

Remind people of the kind of country we want to be, drawing on our best ideals. For some audiences, describing times in our history when we have done the right thing is inspiring.

We believe in religious freedom. We believe in equality of opportunity. We welcome our Muslim, immigrant, and refugee neighbors.

Remind audiences of our responsibilities to our fellow human beings and how we must rise above fear and xenophobia to find our “better angels” as Abraham Lincoln once said. We share responsibility for one another and for protecting and uplifting human rights.

3. Pivot to Solutions: Activism and Lawmaking

Audiences of all backgrounds, particularly those serving the communities directly impacted by cases such as this one, are hungry for solutions and hope in times like these. Remember to highlight what we want moving forward – and how we can get there – in addition to pointing out what we’re up against. Sympathetic audiences need to be primed to feel as though their efforts matter, and that they can be both despairing of this moment in history, while at the same time remembering that our country’s core principle and history is to accommodate all kinds of people. Those in our base need to hear forward-leaning messages about working together to counter and replace bad policies. And undecided audiences need to hear the positive alternatives that are possible.

We recommend structuring messages in terms of Value, Problem, Solution, and Action.  Consider these examples in crafting your messages:

Our nation was founded on the idea that your religious faith and how you worship cannot be used by our government to punish or exclude you. Religious freedom is a bedrock principle of our country and a fundamental constitutional right.

In this case, President Trump blatantly violated that principle, announcing that he would ban Muslims from our country and doing so with respect to countless family members, scholars, and others seeking to visit loved ones or contribute to our society.

Congress – and policy makers at all levels – must now act to stand against this bigoted ruling, and repair this stain on our national values and constitutional legacy.

Call on policy makers at the local, state and national levels to rebuke this ruling and to do everything in their power to reassert religious freedom in our policies and discourse:

Our nation prides itself on its welcoming spirit. As embodied by the Statue of Liberty, these American values must be the bedrock principle by which the government operates and implements policies today.

However, the administration has shown over and over again that it does not believe in upholding this bedrock principle. In President Trump’s policies, executive orders, cases, and argument in Trump v. Hawaii, the administration has used every tool available to ensure that only certain people and religious faiths are welcome in the United States. And today, the United States Supreme Court affirmed the Administration’s blatantly discriminatory policy and chose to side with the Administration’s ban on Muslims from traveling to our nation.

America is better than this – and our country must not condone discrimination of any sort, including on the basis of religion. We must remember that even with our nation’s history of discriminatory policies, the experiment that is the American democracy can and has proven before that its purpose must be to serve its people and truly be as good as its ideals, for all who live, and aspire to live, here. Congress – and policy makers at all levels – must now act to repair this stain on our national values and constitutional legacy.

Call on policy makers, including your member of Congress, to rebuke this decision. Urge them to bring resolutions and legislation that will correct the Court’s decision in Trump v. Hawaii and ensure that the American rule of law reflects the values inscribed on the Statue of Liberty. We are better than this.

Additional material you may find helpful: