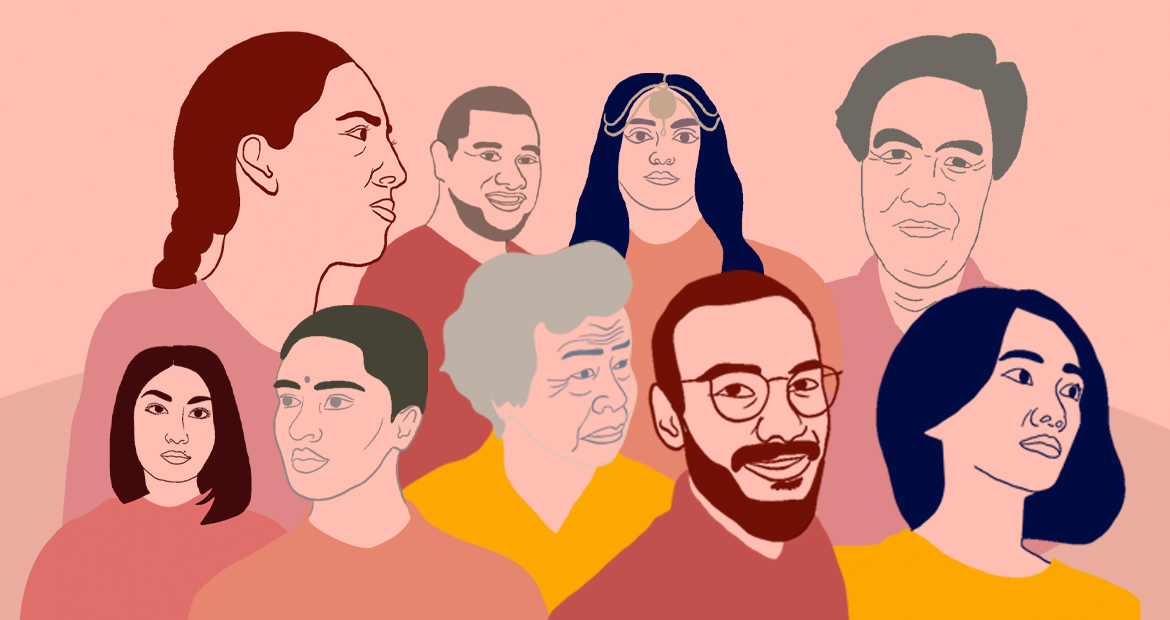 The past year has seen a marked increase in anti-Asian attacks across the country. And while words alone cannot address, heal, or prevent the damage that these cause, shaping and promoting narratives about equity, justice, dignity and respect does shift attitudes and culture over time. In that spirit, we offer five strategies for talking about anti-Asian hate, knowing that these are not sufficient alone, but are a place to start when tackling the long-term narrative shift work that helps to create a more just and equitable world.

This memo was written with consultation and guidance from Gregory Cendana, president and co-founder of Can’t Stop! Won’t Stop! Consulting, and AJ Titong, partner and consultant at [re]imagine collective.

1. Paint a vision that your audience wants to support and engage with: where anti-Asian American and Pacific Islander (AAPI) racism has no place.

While audiences are accustomed to hearing about the harms of racism and, more recently, are becoming aware of the different and ongoing impacts of anti-Asian racism, they are less likely to be familiar with a positive anti-racism vision, rooted in shared values, that they can embrace. If we start our communications with a shared vision of what our country should be: a safe, inclusive place of participation and belonging where everyone’s rights are protected and respected, we can frame anything that gets in the way of that as a pressing issue.

We inherently understand that violence is the opposite of safety, bigotry violates our human rights, microaggressions make true feelings of belonging impossible, and political entities trying to divide us by race are an ongoing barrier to a national community where everyone can participate equally with justice, which should be a shared goal. Drawing those lines explicitly gives audiences some glimmer of hope and can help set them up for long-term participation in a range of solutions.

We need to frame barriers to this vision of becoming an anti-racist society as problems we must all solve. Doing this ties anti-Asian racism to the larger struggle, solidifying the lines of allyship and creating ways to link to Black, Latinx, Pacific Islander, and Native voices without directly comparing or ranking experiences or scapegoating.

A beautiful thing about this country is its multiracial character. But right now, we’ve got diversity with a lot of segregation and inequity. I want to see a truly inclusive society. I think we will always struggle as a country toward that—no postracial society is possible or desirable—but every generation can make progress toward that goal.[1]

We have spoken out before, and we speak out now to express our solidarity and support, even as we seek to build and sustain a campus community where everyone feels welcome, respected and safe. We also must stand and work together with all who believe in and are committed to a peaceful, equitable world where justice is pursued.[2]

2. Move to the Problem. Opening conversations with a shared vision gives audiences a destination. Walking them there is the next challenge. We must have the hard conversations about why and how anti-Asian racism exists, how it differs from other forms, and the particular harms it causes. This is where the advice becomes maybe the most complicated, and the need for balance is clear.

Acknowledge intersectionality—that people experience racism differently based on the multiple identities they hold. Experiencing poverty, misogyny and racism, for instance, poses its own set of challenges and it’s important that we’re clear about that with audiences. Any of these oppressions stand in the way of the country we want to build, but the solutions to them are different.

Be aware, and careful not to further, the “model minority” myth – the notion that many Asian Americans work harder or are somehow better than other racial groups. It’s more powerful and effective to focus on the values we all share – as we all want to be able to provide for our families, see our children get a good education, and to be treated with dignity and respect.

Acknowledge diversity within the larger Asian American community. While people of Asian descent account for a smaller percentage of the population than other racial groups, they are the fastest growing, are not a monolith, and are arguably among the most diverse communities in terms of countries of origin, religion, immigration or refugee status, and culture. They consist of approximately 50 ethnic groups speaking over 100 languages. What Asian Americans share is that the U.S. is home, and they deserve to be treated with dignity and respect and included in the larger fabric of this county. However, that means different things to different groups. For example, while some immigrated here, others are refugees who were fleeing violence in their home countries, which can be markedly different experiences. It’s important to acknowledge such distinctions in history and experience. Similarly, Asian Americans experience things differently based on where they live in the country. It’s crucial to pull this out in our messaging and highlight the diverse practices, philosophies, and experiences that comprise the Asian American identity, while always pointing back to the shared values and the shared desire and right to be treated with dignity and respect.

But be careful and strategic in how you draw distinctions. It is critical to avoid further othering of Asian and Asian American communities, and to instead bring all forms of racism and oppression into focus for what it is: anti-people.

Strategically bring people to solutions and action. While many white people in the U.S. have signaled a newfound readiness to talk about racism and oppression, and BIPOC communities have been having those conversations for generations, it can still be a challenge for many audiences to understand how we can work to dismantle racist systems and prevent individual actions that perpetrate these systems. A starting point is to center on solutions that are specific to your audience and explain how and why they work. What does good allyship look like? How will this policy change people’s lives? How can people check their own behaviors? How are those directly impacted and most marginalized informing your actions and the organizations of causes you are supporting

Too often, racist policies at home and abroad pigeonhole Asian women, immigrant women, and poor women into unprotected, low-wage jobs — including as massage workers in spas even in the midst of a global pandemic — where they are subject to racist and sexist abuse on a daily basis, whether from their customers, employers or police. Violence against Asian American women— regardless of their country of origin or citizenship status — is not new. Racist narratives have exotified, fetishized and hypersexualized Asian women. As Georgia state Rep. Bee Nguyen said, Asian women constantly experience brutality at the “intersection of gender-based violence, misogyny and xenophobia.”

The core element of discrimination and bias, whether based on race, gender, nationality, or other characteristics, is the dehumanization and “othering” of people. This assumes all individuals within these categories are the same and are all of less value than those making these judgments. Many times, multiple forms of “othering” converge to target the most vulnerable intersections of these identities. The dehumanization of these women was personified when the killer justified the murders as the result him just having a bad day.[3]

As sociologists, we have studied racism and its consequences for over a century. Our studies have taught us to recognize myriad forms of racism and its intersection with other forms of oppression. It is clear that the historic and contemporary discrimination and violence against Asians in America are deeply rooted in anti-Asian racism. Yet, anti-Asian racism is too frequently rendered invisible. We have heard from our Asian and Asian American colleagues, students, and community members about the virulent racism they experience daily. We stand in solidarity with the Asian and Asian American community.[4]

3. Consider Audience and Goals. People in the U.S. are coming to conversations about anti-Asian racism from a range of viewpoints and experiences. Some may have only read about specific incidents and yet not understand the broader problem. Others may consider themselves allies in the fight to dismantle systemic racism, but don’t know what specifically to do about recent anti-Asian hate crimes. And some have first-person experiences, and may have trouble seeing what, if anything, could make things better. If the purpose of our messages is to move any of these groups to action, it’s important to choose the vocabulary, stories, metaphors and spokespeople that work for each specific audience. While we want to draw on the same vision and values in order to promote a common narrative of inclusiveness, belonging, safety, and community, we’ll likely promote it slightly differently. In other words, there is no such thing as general public when identifying our audience.

4. Know the counter narrative and do not reinforce it. Some anti-Asian themes consistently emerge in the media, pop culture, and other conversations. While we probably feel like these are quite familiar, they aren’t to all audiences. Though we need to understand where themes like “the model minority” or racist references to COVID-19 developed, we don’t need to spend too much time repeating these problematic phrases or mindsets, which just gives them more airtime. Instead, we should consider how to condemn the thinking behind false narratives, such as the need to divide communities of color against each other and disrupt allyship, the need for othering people, particularly based on heritage, the need to divide people into “deserving” and “undeserving.” By finding ways to consistently counter these harmful ideas, we can change the conversation.

5. Listen to and center the voices of Asian and Asian American communities. As social justice advocates, we should be accustomed to centering the voices of those who are most affected by any issue. It should go without saying that when talking about anti-Asian racism, Asian American community members should lead the strategies on how to counter it. We must also ensure we are engaging those across the diaspora including but not limited to Brown and Black Asians, South Asians and Southeast Asians.

This means taking cues from Asian and Asian American leaders on things like preferred language and strategy. For instance, a common strategy to elevate victims of racist violence is to “say their name,” but not only does this misalign with some Asian cultural practices and traditional grieving, this approach appropriates from a movement meant to honor Black women and Black trans women.

Centering the voices of Asian Americans does not mean that they are the only people responsible for talking about this. Nor does it mean that it’s the only thing they’re responsible for talking about. When it comes to racial justice, none of us will progress as far as we need to without solid allyship and deeper understandings of each other. In fact, we know that an approach that has worked for one movement may not work for another for many reasons including history, community cultures, and power dynamics. Deep listening and sincere allyship mean understanding how and when we can all play the most effective role in the larger struggle, whether it be leadership, support, marching together, or spotlighting each other’s efforts.