Talking About Imprisoned Children at the Border

There is much to say about the horror of watching our government imprison and mistreat children. Responding to the outrage with solutions that will move audiences beyond feeling dismayed, disgusted and helpless is very difficult. But it’s crucial in pushing officials to not only end these practices, but also to move us toward productive and real fixes to our outdated and inhumane immigration policies.

The Opportunity Agenda suggests building messages using a Value, Problem, Solution, Action (VPSA) construction. Leading with values can help audiences see past rhetoric and centers the conversation on what really matters instead of disagreeing over the interpretation of news media coverage, politics, policy or the history of immigration laws. Then move to define the problem as a violation of those values and pivot quickly to solutions, both short- and longer-term. Finally, give your audiences a concrete action(s) so that they can see themselves move on the issue in some form right away.

Value: This is about our national identity, and what we aspire to be as a country. We should strive to be a compassionate and humane nation that respects the value of family and the dignity of migrants, particularly children. We claim a set of ideals that we’ve never lived up to, but we owe it to ourselves and future generations to do everything we can to achieve them now.

In our nation’s treatment of children and families seeking asylum, we are making critical choices about who we are as a nation. This is a historic moment where WE can help shape our own legacy and the type of nation we leave for future generations.

This is not a perplexing scientific puzzle. This is a moral disaster. There has to be some way to communicate, in unequivocal terms, that we are inflicting punishments on innocent children that will have lifelong consequences.

Problem: This administration’s anti-immigrant and racist policies and actions are setting us back morally and ethically. It should go without saying that we should not treat children, or anyone, this way, and yet the administration continues to defend its practice and argue for more funds to support it. Throwing money at brutal and inhumane conditions under the guise of “making our country great again” is not only not the answer, it is wholly unacceptable. This assault on our values harms not just the families and children at the border, but all of us watching what our country is condoning. This is a systemic problem that requires action from all of us.

In my time as a border patrol agent, I’ve developed a unique perspective on twenty years of border policies. I resigned from the border patrol due to corruption, and a lack of ethics and morality. What we’re seeing today is the result of an agency allowed to run with no oversight whatsoever. Years of walls, more agents, guns, planes, detention camps and trillions of dollars has done nothing to make our border communities safer. Using law enforcement to address a humanitarian need has never worked and never will. The Border Patrol needs to be held accountable, border communities have the right to have a voice in how they are governed.

CBP, along with ICE, have a culture of impunity and we are witnessing the consequences in the stories being told by children who are being abused. Cruelty at the micro level of individual officers treating individual detainees abusively is reflective of the cruelty that starts at the top, in the White House and at DHS and CBP HQ. Let’s be clear, the revelations follow a consistent and disturbing theme that has more to do with dehumanizing cruelty than it does with a lack of resources or overcrowded conditions. 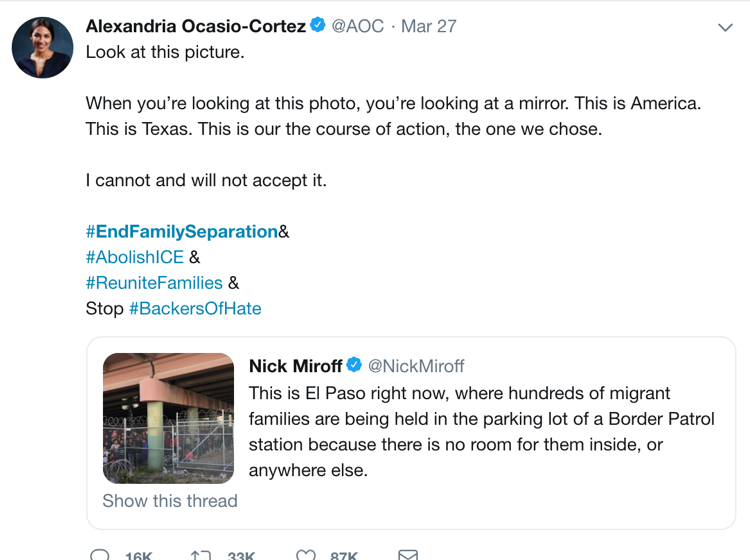 Solution: The government must release these children immediately. And in addition to the range of crucial short-term fixes to the outrageous imprisonment of children, we need long-term solutions to the outdated immigration and asylum policies that allowed this situation to happen in the first place.

Border policies should focus on genuine threats and recognize that migration, in and of itself, is not a threat, nor should it be a crime. Migration is the human experience of seeking life, liberty, and the pursuit of happiness. Facilitating the humane and orderly movement of people across the border increases public safety.

Communities along the U.S.- Mexico border are vibrant, warm and welcoming. However, because of the current enforcement-only policies, at least seven children have died in recent months either while in U.S. Custody or after being detained. Meanwhile migrant families are crammed in dangerously overcrowded cells for days at a time, sometimes in soiled clothes and without access to adequate hygiene. This is unacceptable. A New Border Vision calls for an appropriate humanitarian response to current human needs. A non-law enforcement approach must include sufficient, trained personnel who can provide adequate and efficient medical assistance, resources and support, and welcome residents and newcomers alike to our region.

Immigration detention is not the answer: not for asylum seekers, or for anyone else. It’s a punitive system where lives are in jeopardy. Instead of overcrowding and expanding the deadly system, people need to be released now. Congress must cut funding for detention in FY20, reject the administration’s supplemental request for detention funding and put an end to Trump’s massive expansion of immigration detention now.

Action: The urgency for action is now. We must mobilize, call our representatives, and vote. We need to bring along the final persuadable skeptics who have resisted the idea that this administration is dangerously anti-immigrant.

As a company that helps children become their best selves—curious, creative, caring, and confident—we want kids to understand the importance of having moral courage. Moral courage means standing up for what we believe is right, honest, and ethical—even when it is hard.

Our company’s core belief, stated each month in Highlights magazine, is that “Children are the world’s most important people.” This is a belief about ALL children.

With this core belief in our minds and hearts, we denounce the practice of separating immigrant children from their families and urge our government to cease this activity, which is unconscionable and causes irreparable damage to young lives.

This is not a political statement about immigration policy. This is a statement about human decency, plain and simple. This is a plea for recognition that these are not simply the children of strangers for whom others are accountable. This is an appeal to elevate the inalienable right of all children to feel safe and to have the opportunity to become their best selves.

We invite you—regardless of your political leanings—to join us in speaking out against family separation and to call for more human treatment of immigrant children currently being held in detention facilities. Write, call, or email your government representatives.

Let our children draw strength and inspiration from our collective display of moral courage. They are watching.

1. Stay out of the legal and political weeds. It’s important to underscore that the lengthy and inhumane detention of children, often separated from their families, is not only morally indefensible, but also illegal. That said, a too-involved description of the laws that should be protecting migrants, asylum seekers, and all children will only give the impression that the situation is legally complex and therefore difficult to fix. Provide a brief and straightforward explanation of the law or policy in question:

Roughly one year ago, the administration’s family separation policy supposedly came to an end, following an executive order and subsequent court order banning the practice. The court’s decision, however, applied only to some parents traveling with children. It therefore did not prevent the U.S. government from continuing to separate children from other adult relatives and caregivers, including aunts, uncles, and older siblings. 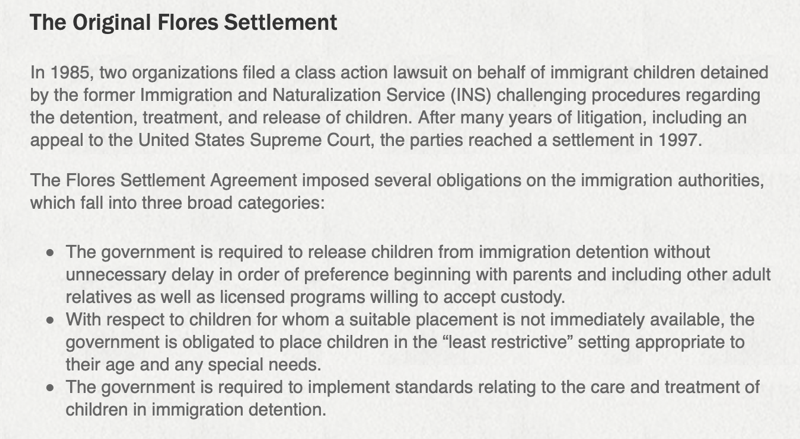 We believe our nation and its leaders have both the moral and legal responsibility on behalf of those who seek safety in our land. The U.S. has an international legal obligation to do so by virtue of having acceded to the 1967 Protocol Relating to the Status of Refugees and, therefore, must implement those duties in good faith. It also has an obligation to do so under its own domestic law, and executive orders should not attempt to set aside these legal responsibilities.

Then move quickly to the solution including what needs to happen, and who needs to do it:

Detention of children and adults alike is not the answer. Rather than building up the infrastructure of a system that is riddled with abuse where lives are in jeopardy, Members of Congress should be calling for the closure of detention centers across the country and advocating for people to be released.

2. Avoid implying that the detention of children and separation of families is a new, or recent, phenomenon or something “we just don’t do.” Talk about who we should be without repeating historical (and current) myths about adherence to ideals. It’s important to remember that there are many instances in our country’s history during which our government separated children from their families, and imprisoned people unjustly.

What I saw today is simply not who, we, as a country should be. This is cruel and inhumane treatment and we cannot allow it to continue on our watch.

Instead, use history to show how backwards and shameful our obsession with detention and incarceration is, and what it’s led us to do or accept in the past.

Fort Sill is a site steeped in layers upon layers of historical trauma. Over 700 Japanese Americans were detained there during WWII, and one man, a Japanese immigrant and father of 11, was shot and killed while suffering a nervous breakdown and trying to escape. Before that, Fort Sill was a prisoner of war camp for members of the Chiricahua Apache tribe who were forcibly relocated there from the Southwest. It also housed a boarding school where Native American children were separated from their families and subjected to cultural genocide. Fort Sill has always been a violent place — and it is time for that violence to end. “Never Again” is right now. It’s happening all around us, every day. We must be vigilant in showing up and demanding that sites like Fort Sill be shut down. No one showed up for Japanese American families like mine in 1942, but we can and we must show up for immigrant children and families today. 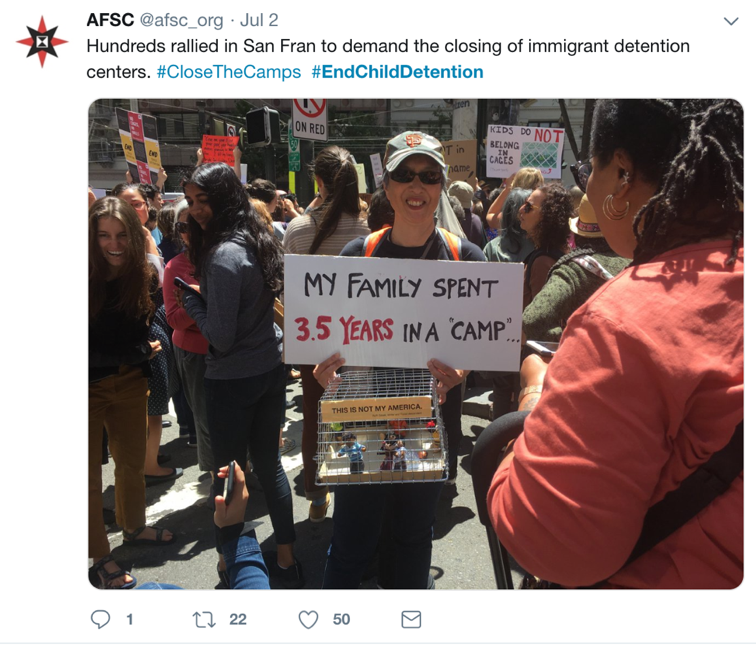 Forcibly yanking children from their parents is of a piece with some of the darkest moments of American history: the internment of Japanese Americans; the forcible separation of American Indian children into special boarding schools; slavery. 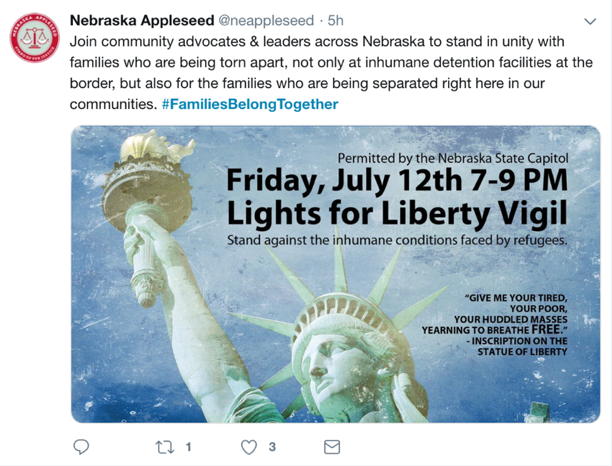 I should note that there is a big distinction between having access to a caring, supportive adult in a home setting versus a detention facility. While a parent may technically be present in family detention centers, the conditions of confinement and a parent’s limited power to parent their children all have adverse impacts not just on the child, but on the parent-child relationship. In fact, studies on family detention have shown that both parents and children frequently view staff as the ones who have control in these settings, sometimes even in disciplining children. It is important for children to feel safe, and children primarily look to their parents to provide them protection so that they feel safe. Yet, in detention settings, children actually watch their parents lose power. They see the way that their parents are humiliated either through direct insults or by being refused simple requests—like access to drinking water or to use the restroom. Often, children lose respect for their parents, feel resentment and anger towards them, and ultimately lose their sense of security.