​Freedom, opportunity, respect, and dignity – just some of the core values that many Americans say define them as individuals and a country. It was these same values that bubbled to the surface in a series of focus groups we held at the beginning of the year in three regions of the country. In collaboration with UnidosUS[1] and Lake Research Partners, we set out to examine how Americans were thinking and feeling directly following the November 2016 election. We found many people united in their concern about the divisive tone of politics and the treatment of people of color, and a shared willingness to act in support of positive change.

This memo draws on the results of this collaborative research project and provides an overview of key findings from a national online dial survey administered to a total of 1,000 registered voters nationwide in March 2017, with oversamples of 100 African Americans, 100 Latinos, and 100 millennials. The margin of error is +/- 3.1 percent for the overall sample and larger for subgroups.

Due to the sample size, we were unable to draw conclusions about three subgroups: Native Americans, those lacking a high school diploma, and those with non-college, post-secondary education. The sample size of each group was too small to make any reliable inferences.

Key findings from our latest analysis include:

1.  Americans are united in their concern about the level of respect people in our country have for those from different cultures. Survey participants were asked how concerned they were about the level of respect people have for those from different cultural backgrounds on a scale of 0 (not concerned) to 10 (very concerned). A score of 5 was neutral. The majority of Americans across racial groups, political party affiliation, age groups, and education levels identified as concerned (i.e. reported a concern level of 6 or higher).

Across racial groups, Black Americans and Asian Pacific Islanders were most concerned, with 88 percent of Black Americans and 87 percent of Asian/Pacific Islanders expressing levels of concern 6 or higher. This compares to 83 percent of Latinos, and 79 percent of White Americans. Across political party affiliation, an overwhelming majority of “strong” Democrats[3] (90 percent) expressed high levels of concern about the current level of respect given to people from different cultures, compared to 71 percent of “not strong” Republicans. Across age groups, those under 30 were more likely to express concern than those aged 50-64, with 85 percent of voters under 30 expressing concern, compared to 79 percent of voters aged between 50-64. 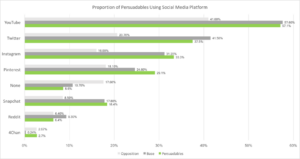 7.  Persuadables are more likely to support social safety nets when a populist framework focused on the role of wealthy individuals and corporations is adopted. We randomly assigned half of survey participants to respond to the following question:

Which of two statements more closely reflects your views: A) there is “too much focus on helping people who take advantage of government assistance,” or B) the wealthiest corporations and individuals should “pay their fair share”. When framed as an issue of the wealthiest not contributing their fair share, 52 percent of persuadable respondents favored option B and agree that the wealthy should contribute more, compared to 39 percent who favored statement A.

The other half of survey participants were given a similar choice, but option B was modified: A) there is “too much focus on helping people who take advantage of government assistance,” or B) “everyone benefits when we help the people who need it most.” When framed this way, persuadables are more divided on their views, with 49 percent favoring statement A, and 41 percent favoring statement B.

9.  Persuadables believe strongly in the power of diversity to strengthen, unite, and  better our country. Ninety-five percent of persuadables agreed that embracing diversity makes us strong as a country, and 93 percent agreed that it makes us united. Eighty-seven percent agreed that people from different cultural backgrounds make positive contributions to American society. This trend carries across political parties, racial groups, and age groups, with each subgroup responding very positively to diversity and its impact on the country.

The overwhelming majority of Americans are excited to mobilize and bring about change. Eighty-five percent of the base is excited to “join together with other people to take action and bring about change.” Similar levels of motivation were reported across political parties, racial groups, education levels, and age groups. However, there was significant variation among education levels and age groups. More education and higher age are both associated with lower levels of excitement.

These findings have several implications for galvanizing support and collective action for social justice movements: 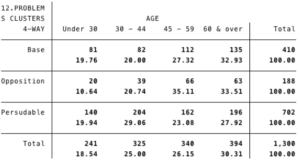 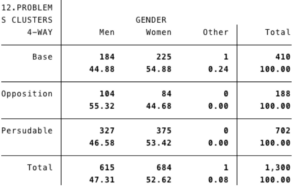 [2] Persuadables are individuals who have attitudes that overlap with both the base and opposition. For a full breakdown of their demographic characteristics, see appendix.

[3] Those who strongly self-identified as Democrats.