Skip to content
The Opportunity Agenda – Our Tools – The Case of the Cultural Influencers: Colin Kaepernick, Jimmy Kimmel, and #MeToo

The Case of the Cultural Influencers: Colin Kaepernick, Jimmy Kimmel, and #MeToo 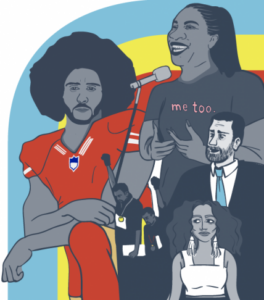 In recent years, the power of popular entertainment to inspire large audiences and shift cultural norms has become a topic of growing interest in the social advocacy space. A large body of research has been dedicated to tracking representation trends in film and television, and a growing cohort of organizations provides practical recommendations for those seeking to leverage popular culture in their advocacy work. While existing research has provided critical insights into the effectiveness of high-profile spokespeople in short-term campaigns and fundraising, significant gaps in the literature exist in terms of in-depth analysis of more symbolic actions on the part of high-profile individuals as well as measurements of the impact of celebrity influencers on long-term narrative shift.

Under which circumstances do cultural influencers have the greatest ability to achieve their goals?

Currently there is a pressing need to better understand the potential of high-profile influencers to not only draw attention to social issues but also spark meaningful dialogue and actions that lead to lasting social and policy change. As part of our Power of Pop series, this current research examines three cases of high-profile entertainers and athletes speaking out or advocating for a social and/or policy change. The cases include: Case 1: Colin Kaepernick and the Take A Knee protest Case 2: Jimmy Kimmel and the healthcare debate Case 3: Me Too and Time’s Up movement This research aims to better understand the unique influence of high-profile athletes and entertainers and provide practical recommendations for those seeking to work directly or indirectly with cultural influencers to shift narratives and effect policy change. Key questions explored in the research include:

To evaluate the effectiveness of the range of strategies and issues covered in our selected case studies, we established the following criteria for success:

Taken together, our findings demonstrate that strategic engagement from high-profile influencers can have the following impact on social advocacy campaigns:

Read the entire Executive Summary, including Recommendations, or download the Full Report to learn how you can take action.