Perceptions of and by Black Men

Since the mid-20th century, the United States has seen an enormous shift in public attitudes toward black-white relations, segregation, and blatant prejudice. At the same time, racial tensions, obstacles, and stereotypes continue, and Americans of different racial and ethnic backgrounds hold divergent understandings of discrimination and the causes of racial disparities.3

Besides contributing to a negative civic environment, stereotypes matter because they may undermine support for efforts to reduce racial disparities. If white people view African Americans as lazy, they are less likely to support government anti-poverty programs. Or, if it is commonly believed that black people are unintelligent or violent, it will hinder efforts for school or neighborhood integration, for example. And if black people believe these negative things about their own group, it may contribute to low self-esteem and other problems.

Public opinion research suggests that positive and negative views toward black people may be grounded in multiple arenas. In other words, while one might assume that a particular experience or aspect of a person’s background would cause an individual to feel either positively or negatively toward a racial group, or to ascribe to one of two opposing views (black people are hardworking or lazy, etc.), research suggests that responses toward a racial group may have different antecedents and be multifaceted.

For example, in research conducted by Patchen, Davidson, Hofmann, and Brown in 1977, they found that:

Lipset and Schneider, in their 1978 analysis of the Bakke case, and Katz and Hass in their study of “Racial Ambivalence and American Value Conflict” (1988) found that:

The conscious attitudes about racial and ethnic groups reviewed in this section probably tell only one small part of the story, and subsequent sections (for example, discussions of personal responsibility and altruism) are highly relevant to attitudes of racial groups as well.

Many studies over the years have found that people are willing to assess groups on a variety of image traits with no description other than racial category. In research done by the National Opinion Research Center in 2010, people were asked to place racial groups on a 1 to 7 scale, with one end of the scale anchored by a particular trait and the other anchored by its opposite trait. Pluralities of survey respondents opted out of rating blacks or whites on intelligence, work ethic, and (to a lesser extent) wealth. However, of those who did give ratings, more said whites are intelligent than said blacks are intelligent (44 percent gave “intelligent” ratings for whites, 30 percent for blacks), and the same pattern held for “hard working” (37 percent for whites and 20 percent for blacks), and “rich” (41 percent and 7 percent, respectively) (see Figure 1). 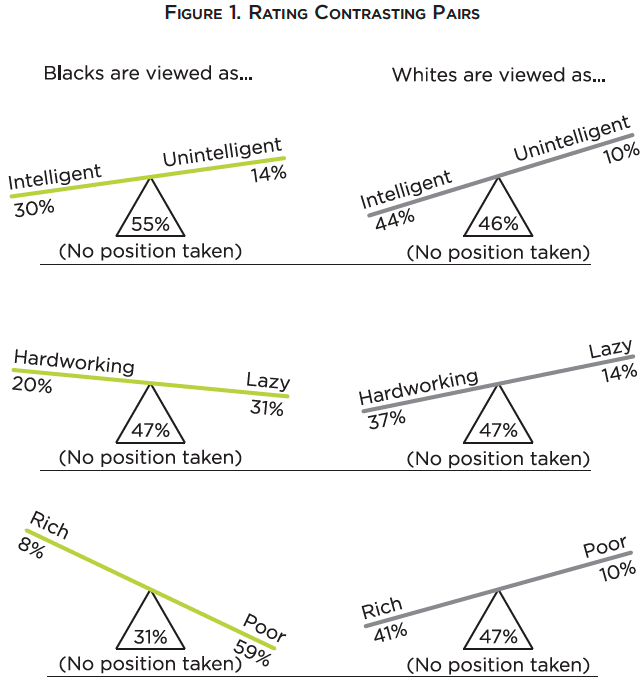 More black men experience significant challenges than white men, have higher levels of worry, and are harsher in their judgment of black men. Even so, more are focused on achieving success in a career, on living a religious life, and are optimistic about a bright future. In just about every area, black men are their own harshest critics, as well as the most optimistic that things will get better.

Many black men have faced traumatic experiences in their lives. In a Washington Post/Kaiser Family Foundation/Harvard 2011 study entitled “The Race and Recession Survey,” more black men than white men report having a close friend or relative who was murdered (61 percent and 29 percent, respectively), wrongfully arrested (31 percent, 16 percent), or the victim of a violent crime (25 percent, 18 percent). In only one area surveyed in this study have more white men than black men experienced a challenge — getting laid off or fired from a job (62 percent of white men, 54 percent of black men), a gap closed since the start of the recession (see Figure 2). Now, 27 percent of black people and 21 percent of white people say they have been laid off or lost a job in the past year, and more black people than white people say they are unemployed (44 percent and 40 percent, respectively) or underemployed (17 percent and 12 percent,  respectively). 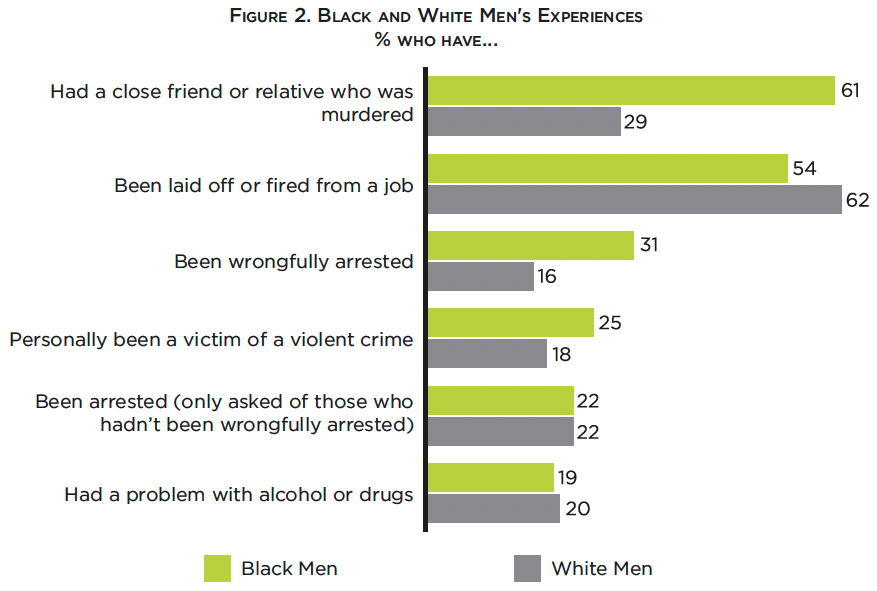 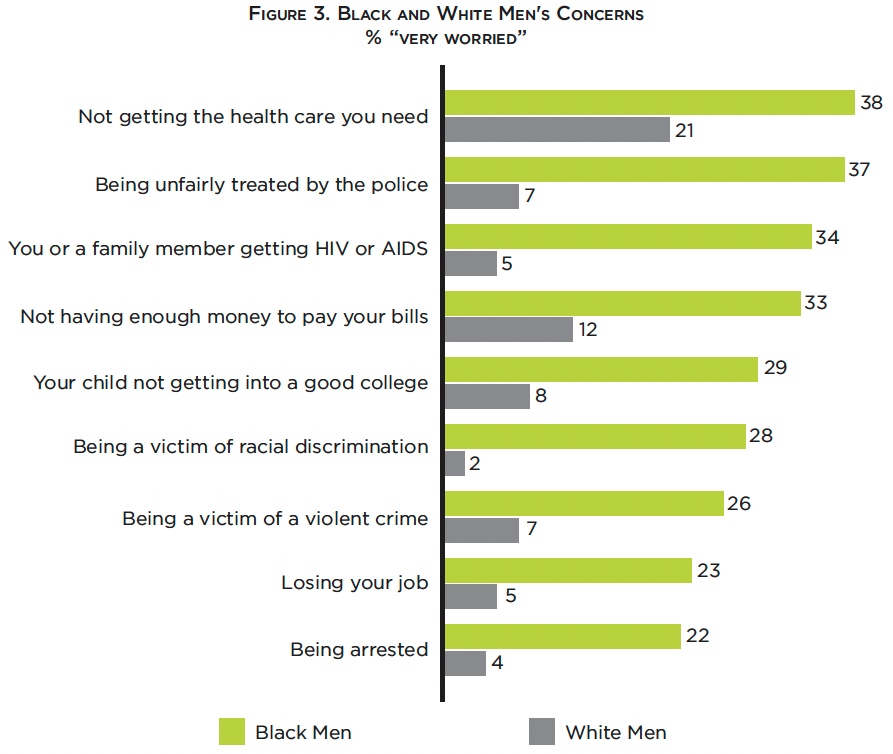 According to the 2006 Washington Post/Kaiser Family Foundation/Harvard study, “African American Men Survey,” in rating a series of problems facing black men, black men themselves are more likely than other audiences to rate a range of problems facing them as severe, including not taking education seriously enough (91 percent), becoming involved in crime (88 percent), drug and alcohol abuse (87 percent), not being responsible fathers (85 percent), not having good jobs (85 percent), HIV/AIDS (82 percent), poverty (77 percent) and, lastly, discrimination (68 percent) (see Figure 4). Black women’s ratings are similarly high, while white men and women are not as grim in their assessment of the problems facing black men. Asked to choose the single biggest problem facing black men, 31 percent of black men chose “not taking their education seriously enough.” 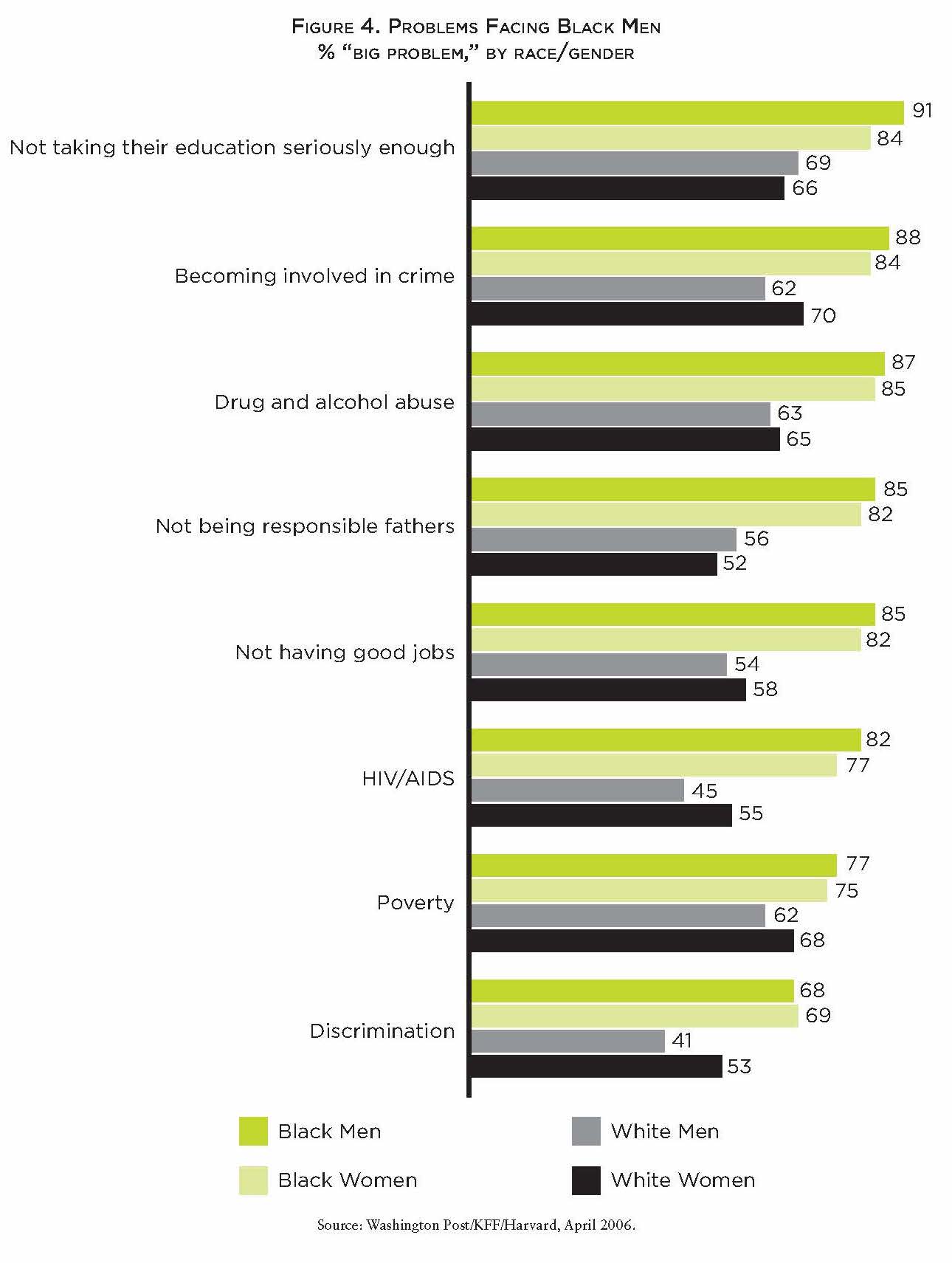 Note that many of these “problems” — not taking their education seriously enough, not being responsible fathers, becoming involved in crime, etc. — can be read as admonishment of black men or black families. Black men are their own harshest critics in this regard.

Black men and white men report very different priorities. For example, according to the Washington Post/KFF/Harvard 2006 study, compared with white men, black men put more importance on being successful in a career (76 percent of black men, 56 percent of white men), living a religious life (70 percent, 44 percent), being respected by others (76 percent, 59 percent), and standing up for their racial or ethnic group (76 percent, 33 percent) (see Figure 5). 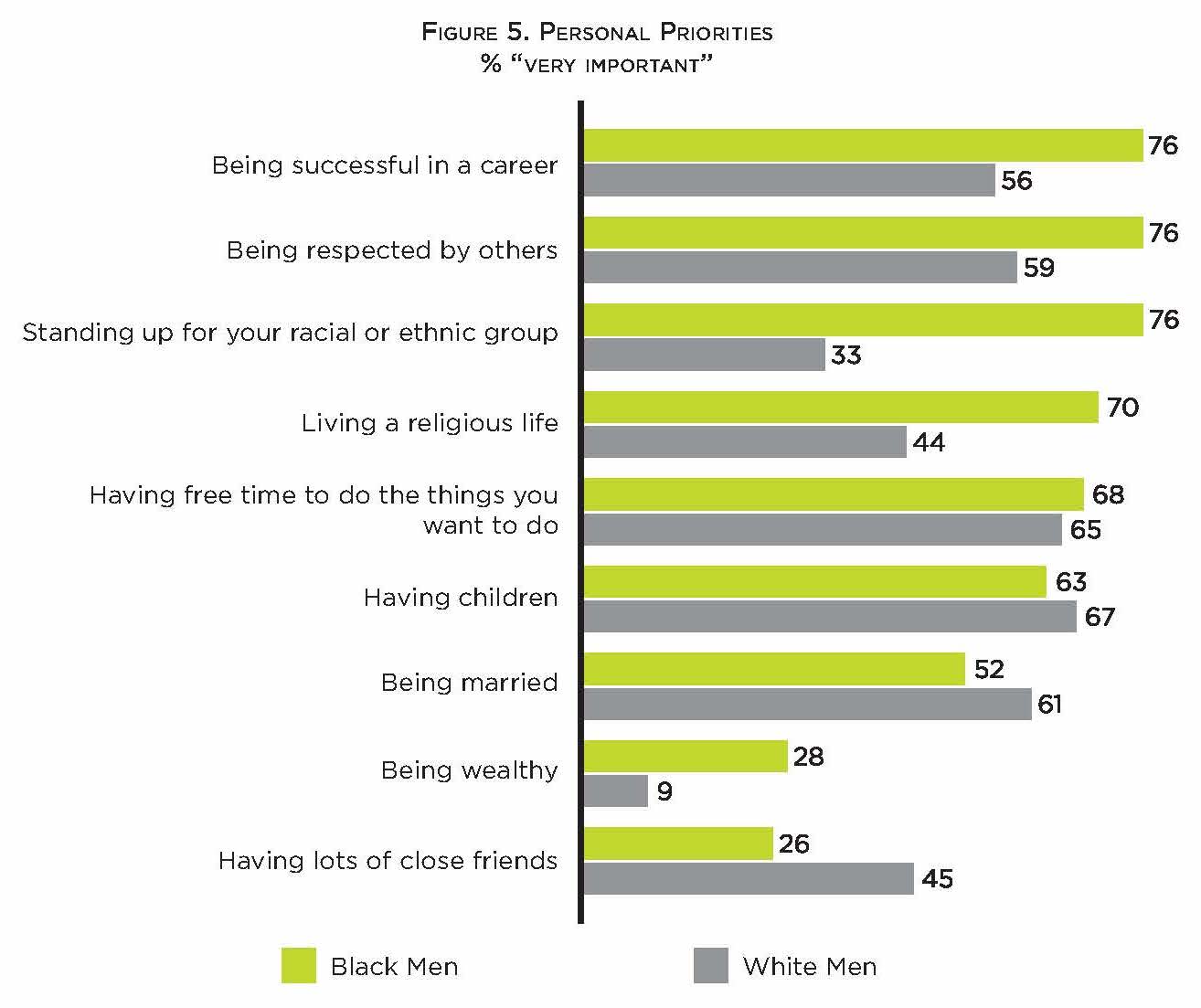 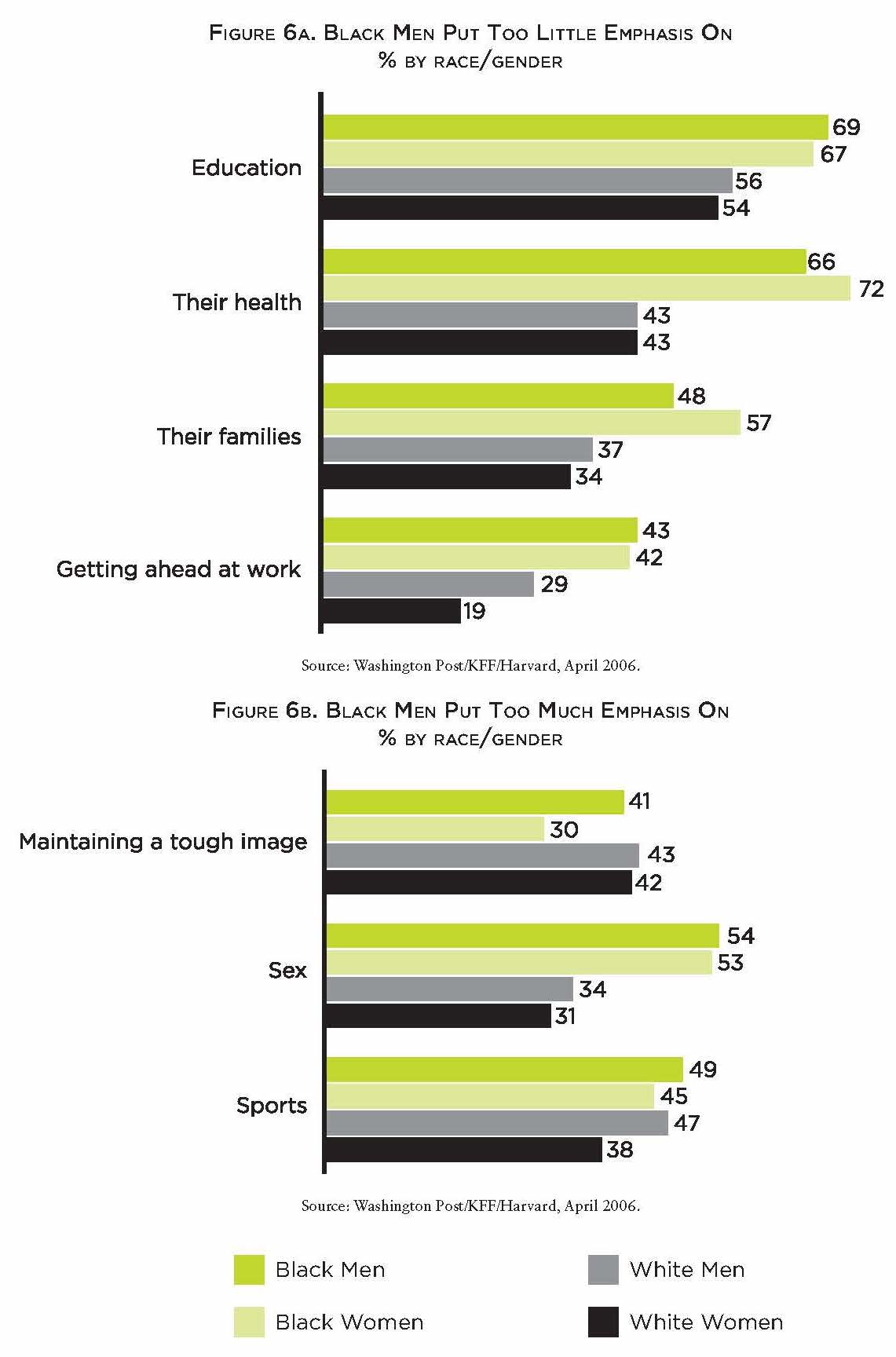