Skip to content
The Opportunity Agenda – Our Tools – Talking About The U.S. Border: Imprisoned Children, Lost Parents, and Separated Families 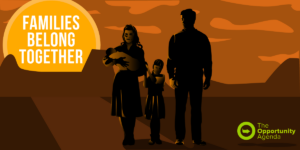 The administration’s willful separation of children from their parents at the Southern U.S. border is an atrocious violation of human rights and dignity, and part of a broader pattern of cruel, biased, and destructive border and immigration policies. The horror of watching our government press criminal charges against adult asylum seekers while at the same time pulling their children from them for imprisonment in cages captured  national attention two years ago. Now the damage and trauma has been solidified for more than 500 immigrant children whose parents our government can’t locate. In this moment of national reckoning, we must acknowledge the distress and disgust we are feeling and channel this anger into action through voting, organizing, and working with immigration rights allies to make sure this never happens again.

Making sure that the narrative on immigrants is centered on the values of dignity, safety, mobility, and human rights is also crucial. Based on consultation with our partners in the border region, our assessment of the evolving media discourse, and available public opinion research, we recommend framing and discussing the administration’s actions and the alternatives in ways that lead to activation as well as persuasion. We recommend lifting up our shared values as a nation, making clear how the separation and incarceration of children is part of a broad approach and ideology that violates those values, and providing specific alternatives and actions that our audiences can take and policymakers must pursue.

The Opportunity Agenda reminds communicators to consider your audience(s) and build messages using a Value, Problem, Solution, Action (VPSA) framework. We know that doing so helps persuade people of disparate views to see past rhetoric and embrace our shared humanity.  It centers the conversation on positive change that moves us forward together. That’s especially important in this case, allowing the conversation to focus not on disagreements over policy detail or past administrations, but on action and the values we share.

State these values clearly, then move to defining the problem as a violation of those principles and pivot quickly to solutions, both short- and longer-term. Finally, give your audiences a concrete action so that they can move on their concern right away.

Below are some examples of VPSA messaging around the border and what to do about it.

This is about who we are as a country – our national heart and soul. It is also about the children themselves and ensuring their safety and security. The United States must be a compassionate nation that protects children, respects the value of family, and upholds the dignity of all people, wherever they come from.

What I saw today is simply not who, we, as a country should be. This is cruel and inhumane treatment and we cannot allow it to continue on our watch.

Holding children hostage for political gain is morally reprehensible and a dark atrocity that we cannot tolerate. What has been less focused on is that while this is happening, the administration is criminally prosecuting the parents of these children, who face up to 20 years in prison for seeking refuge and a better life for their families in the United States.

Separating immigrant parents and children as a supposed deterrent to immigration is a cruel and reprehensible policy. Children are not instruments of deterrence, they are children. A government that thinks any means is suitable to achieve an end cannot secure justice for anyone.

If you think about what the Republican Party has stood for, it’s family values and protecting children, so it seems contradictory that they’re engaging in this enforcement activity of ripping kids from their families. It’s really troubling to see that an administration can be so callous. It’s beyond the pale.

The staggering inhumanity of this president’s treatment of these children belongs in the darkest chapters of our nation’s history—the ones we can never forget and must never repeat.

Tearing children from families fleeing harm is part of a larger pattern by this administration of bigotry and cruelty toward people based on their skin color, religion, and national origin. It is also part and parcel of the administration’s return to flawed over-reliance on incarceration and criminalization. This assault on our values harms not just the families and children at the border, but all of us watching. It is also a stark reminder of the history of discrimination and internment based on race and ethnicity that we must rise above rather than repeat.

Zero tolerance, especially toward immigrants, isn’t just a policy proposal to this president and his allies—it is the ideology that animates the entire Trump phenomenon, and a defining characteristic of the world as they want it to be.

The government must work with lawyers and advocates to find the parents of these children immediately and reunite them.  Families belong in communities, not cages, and not separated across borders. And in addition to the range of crucial short-term fixes to the outrageous separation of children, we need long-term, transformative solutions to the bigotry, flawed immigration rules, disrespect for asylum, and misuse of incarceration that allowed this situation to happen in the first place. We must stand against the administration’s retrogressive vision for a structure of immigration enforcement and criminalization in our country. This moment has the potential to be a turning point toward a positive vision.

The government should be held accountable, absolutely. These families deserve compensation. They’re dealing with children and the parents themselves are deeply traumatized. This has a really broad-reaching impact on societies.

We are proud to join nearly 300 organizations on this letter to Congress, calling on Members to cut funding for the agencies of ICE and CBP that endanger immigrant communities. It’s time to #DefundHate.

There’s big business in borders and lock-ups. Companies like the GEO Group make money when families are torn apart. We don’t belong in cages, #WeBelongTogether in FREEDOM. We demand our government choose people over profits.

I call on the Trump administration to release all of these individuals immediately, to give them access to attorneys to quickly process their asylum claims, and for them to be immediately reunited with their children […] I will also continue to push to defund ICE, to completely reform the immigration detention system and end mass prosecutions by the Department of Justice, and defund any Department of Homeland Security programs that break up families.

This administration’s unchecked power must be challenged now. We must mobilize, call our representatives, and vote. Now is the time to bring in the persuadable skeptics who have resisted the idea that this administration is dangerously bigoted toward immigrants and people of color.

So ultimately, we have to turn the tide on Trump’s politics of fear and division — by voting […] The majority Americans, the “coalition of the decent” are disgusted by what they’re seeing on TV and in social media, but we have to put our beliefs into action.

Call your local, state and/or national representatives to let them know that you think this is a humanitarian issue. You can find your federal senators and representatives here.